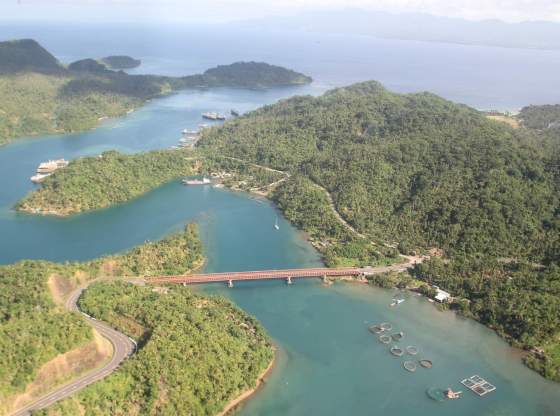 Sula used to be the sanctuary of galleons during the Spanish era and refuge of big vessels in time of typhoons is now exploited as prominent and well-off individuals are putting a rest houses, beach resorts and fish cages destroying the natural habitat and wonders of the channel.

“Sula channel is being reclaimed, nobody should be above the law. We have to enforce the law to the fullest. Albay and Legazpi is noted as one of the best in the country.”

Rosal asked the mayor of Bacacay to stop the reclamation and exploitation of Sula channel, as it is the historical natural landmark in the country, specifically in Cagraray Island.

“When you visit the place, “makikita niyo parang private na”, “may mga bunuan”, “may mga fish cages”. We must put a cessation to this unprecedented show of disrespect to our natural environment. It is illegal.  I call on the local government of Bacacay, specifically the mayor, to take action immediately to stop the reclamation in Sula and fish cages,” the new governor of Albay said.

“It’s a shame because even the uneducated persons are aware that the ongoing activities in the Sula channel are illegal.  Imagine the people of Sula who did not even finish off a grade 6 are aware that the activities there are illegal. Nakakahiya sa atin mga officials,” Rosal said.Rosal said during the inaugural session of the 14th Sangguniang Panlalawigan of Albay that the ongoing illegal activities in Sula channel is considered as an abuse of discretion.

He reminded the mayors that “reclamation is not under their authority.”

“Reclamation is not under your authority. It is for the national government to determine whether or not to issue a clearance to reclaim the area. I’m sorry but I have to emphasize this because Albayanos are scrutinizing us on this matter. It’s a shame because even the grade 2 persons, an elderly whom I talked to, are aware of the law and are questioning the ongoing activities in Sula. This should be corrected in the soonest time,” Rosal told the mayors of Albay.

The Bureau of Fisheries and Aquatic Resources in Bicol said that the local government unit of Bacacay should check, regulate and enact ordinances so as not to compromise the overall condition of the channel, Nonie Enolva, BFAR regional spokesperson said.They should enact ordinances on the matter and it shall be reviewed by the Sangguniang Panlalawigan of the Albay Province because they also have jurisdiction over it, Enolva said.

“The recommended area to be utilized for aquaculture should not be over 10 percent of Sula Channel. They should consider the carrying capacity of the body of water. No obstruction to navigation must happen,” Enolva told The Manila Times.

“The registered fisherfolk of the municipality has the preferential right to own and operate fish cages but regulations must be set by the local government in order not to compromise the overall condition of the channel,” she said.

“Similarly, they should have zoning ordinance and the area should be included in the Comprehensive Land Use Plans (CLUP). The place is identified by PCG as a sheltering area of big vessels specifically during bad weather disturbance,” Enolva said.Mayor Dinky Romano of Bacacay town in an interview over the mobile phone said that the fish cages within the Sula channel are under the supervision of the Bureau of Fisheries and Aquatic Resources.He said that the LGU is toeing the BFAR’s guideline on fish cages.

Historically, Cagraray Island in Bacacay town where the Misibis Bay Resort is located is considered as a historical jewel because of the archeological relics found there between l879 and 1888. Juan Alvarez Guevarra found sacred burial jars in two of at least 28 caves in the island. Local historians suggest that these archeological evidences could prove that Cagraray Island was the cradle of Bicolano civilization about 200,000 to 300,000 years ago.(Rhaydz B. Barcia)