BFAR lights up candles for dead mammals in Bicol 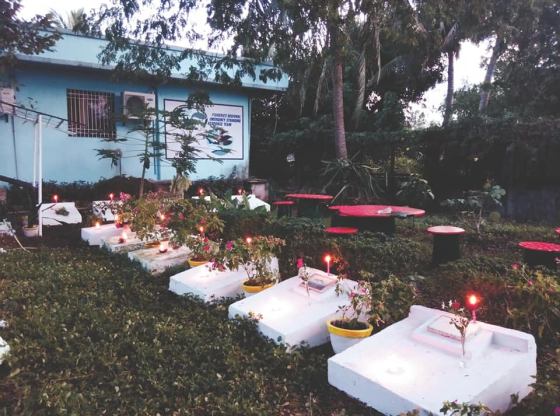 Legazpi City ––Yearly, employees of the Bureau of Fisheries and Aquatic Resources (BFAR) lit a candle at Cetacean Cemetery, the resting place of dead mammals in Barangay Fabrica, Bula town in Camarines Sur.

Pink candles lighted in each tomb of sea mammals’ graveyard while pots of flowers were also put up in between the tombs within the cetacean cemetery, three days before the All Souls ‘Day and All Saints’ Day celebration in the countryside.

Nonie Enolva, marine biologist and BFAR regional spokesperson said that they lighted a candle for dead mammals last October 28, a few days before the “Undas” or All Soul’s Day commemoration here.

“We lit a candle on October 28 as it was our last working day before the undas,” she said.

Currently there are 11 dolphins, one Bryde’s whale and one manta ray were buried inside the 15-hectare compound of BFAR in Barangay Fabrica in Bula, Camarines Sur.

The Cetacean cemetery established by BFAR Bicol aims to raise the level of awareness of people on the importance of these protected species in maintaining the ecosystem balance in the oceans.

“Most of the causes of death are anthropogenic like blast fishing, ingestion of solid wastes, net entanglement or boat strike,” Enolva said.

“It showcases representative samples of the families of whales and dolphins in the Philippines. Don’t know if they have souls, though,” she said.

The mammals’ burial ground is the Philippines’ first cetacean cemetery for the finned and carnivorous aquatic mammals like whales, dolphins and porpoises uncovered and stranded in Bicol since 2013 to date.

These dead mammals were fished out and found by the local fishers and brought to BFAR’s RFFC for a necropsy conducted by the members of the Fisheries Regional Emergency Stranding Responding Team to determine the probable cause of death for scientific study by the students and researchers.

The Cetacean cemetery was established in 2013 by BFAR Bicol through its Fisheries Regional Emergency Stranding Response Team to serve as the resting place of the whales and dolphins after its necropsy or post-mortem examination.

Since the establishment of Cetacean cemetery BFAR employees are lighting a candle for dead mammals. Bicol region is considered as a hotspot of endangered sea mammals due to its archipelagic location.

Bicol region has the highest record of stranded sea mammals since 2015 with 12 to 21 stranding incidents per year. When asked about the importance of marine mammals in biodiversity, Enolva said that sea mammals help out to maintain the ecological balance of the seas as apex predators.

Cetaceans are a widely distributed family of finned and carnivorous aquatic mammals, which include whales, dolphins and porpoises.