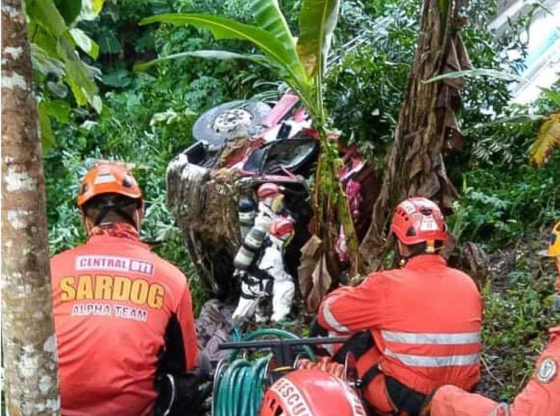 According to the preliminary investigation by the Marilog Police Station, the truck’s driver avoided hitting another vehicle while it was traveling on the Davao-Bukidnon National Highway toward Davao City. As a result, the tanker swerved, collided with an electrical post, and then fell about 50 feet into a ravine.

This led to a caustic soda spill in the nearby Suawan River.

Central 911 was able to successfully rescue the truck driver and his assistant. However, the driver was pronounced dead while his assistant received on-site care and declined to be taken to the hospital.

The incident has already been reported by Central 911 to the Department of Environment and Natural Resources’ Environmental Management Bureau (DENR-EMB).

Given that exposure to caustic soda in high concentrations can cause serious harm to the eyes, skin, digestive system, or lungs, which could result in permanent damage or even death, the City Disaster Risk Reduction and Management Office (CDRRMO) advised residents of Davao not to bathe or go fishing close to the Suawan River or other tributaries of the Davao River.

Further, prolonged or repeated skin contact may cause dermatitis, and repeated inhalation of sodium hydroxide vapor can cause permanent lung damage.

Fish along the Suawan River have died, according to reports on the ground. In order to assess the level of contamination, DENR-EMB and the Davao City Health Office (CHO) will examine water samples from the Suawan River.