DENR to release a rescued Philippine Eagle on June 13 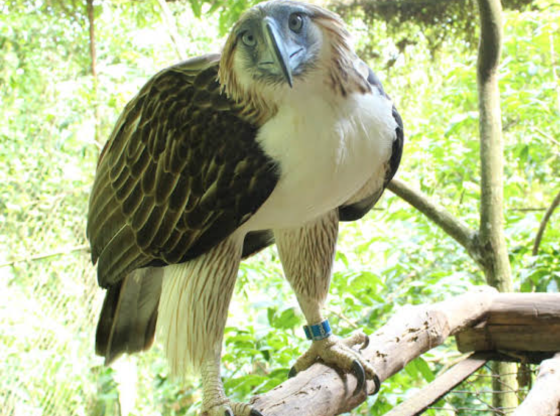 The Department of the Environment and Natural Resources (DENR) has scheduled the release of another rescued Philippine Eagle on June 13.

DENR will release Salagbanog, a raptor, as part of Philippine Eagle Week, which runs from June 4 to 10.

The release is to commemorate Salagbanog’s return to the forest, 18 months after it was raised in captivity to fully recover, according to DENR acting Secretary Jim Sampulna.

“Salagbanog’s capture was a testament to the Philippine Eagles’ continuing battle on the loss of its habitat and a chance for the raptor to get back up on its feet, survive, and live freely. The battle for these birds is our own battle too,” Sempulna stated.

Salagbanog was healthy and disease-free, according to the veterinarian who examined him.

The secretary also said that releasing a national treasure to allow another bird to fly free should serve as a reminder that wildlife, like humans, must contribute to the survival of all living things on this planet.

“It should remind us that wildlife, just like people, have to fulfill their role for the sustenance of life on Earth,” he said.

Likewise, the presence of eagles in the country’s forests, according to the Philippine Star, confirms the existence of a healthy and diverse environment.

On January 8, 2021, Salagbanog was rescued by a T’boli farmer from the thorns of rattan vines after it preyed on a monkey at Salagbanog Falls in Maitum, Sarangani.

The raptor’s X-ray revealed a marble lodged under its skin and a pellet stuck in its right clavicle, suggesting he was shot with improvised weapons.

Salagbanog was the second Philippine eagle to be rescued in Maitum, Sarangani. The first was Sarangani Pride, rescued on January 2, 2017, by a farmer in Barangay Batian.

Filipinos should be made aware of their responsibility as wildlife caretakers, as well as the importance of the Philippine Eagle in maintaining life and human survival, according to Sampulna.

In its previous press release, DENR said that the Philippine Eagle is the country’s national bird and is classified as critically endangered. In January 2022, the DENR IX RWRC released Godod, a rescued and rehabilitated Philippine Eagle, back into the wild in the municipality of Godod, Zamboanga del Norte. (Photo: MindaNews)