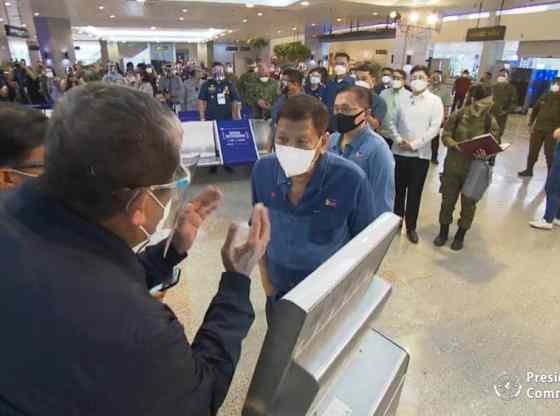 Daraga, Albay ––The Philippines iconic and picturesque Bicol International Airport, in the municipality of Daraga, Albay south of Manila, was finally inaugurated by President Rodrigo Duterte on Thursday.

The President said the new airport brings pride and joy to provide added transportation to those who will travel to and from the Bicol region, likewise expressing appreciation for local officials for making it come true after 11 years of delay.

“It is my pleasure to join you today the completion of this world place Bicol International Airport brings pride and joy to provide transportation to those who will travel to and from the Bicol region,” the President said.

“This airport is the most scenic in the country that would allow better connectivity. On this note, I urged the management and staff to provide safety standard modern airport to ensure the passengers get the best service they deserve,” he said.

He also called on authorities to ensure best quality service fully deserved by passengers, noting that the BIA will serve the needs of about two million passengers annually.

Transportation Secretary Arthur Tugade turned over to the President the key during the inauguration of BIA, 11 years after the construction under the three administrations.

Tugade said that the construction of BIA was challenging as it went through a series of typhoons and the New People’s Army perpetuated arson incidents.

“The construction of BIA was a “personal challenge” to me as some had doubted that the airport would not be finished under the Duterte administration. Construction works were delayed for 11 years. It went through three groundbreaking ceremonies prior to this administration. While we were building it, it also suffered arson incidents [perpetrated by rebels],” Tugade said.

Tugade said the BIA would be ready for international flights this year but subject to International Civil Aviation Organization review. Once fully operational, BIA is expected to accommodate a total of 2 million passengers a year, he said.

The BIA is the new air transportation hub known as the country’s “most scenic gateway” with a ten-fold increase in capacity from the previous Legazpi Domestic Airport terminal to better serve the entire Bicol Region.

The project materialized through the continued efforts of the Department of Transportation and Civil Aviation Authority of the Philippines to provide not just an airport but a world class travel experience.

Demonstrating the Department of Transportation’s commitment to the Duterte Administration’s “Build Build Build” Program and to continuously provide a safer, more modern, and secure airport that is globally connected for the Filipinos and the traveling public.

The opening of BIA in Bicol marks a milestone of the region’s development in the middle of the global pandemic.

The inauguration of international airport was attended by Rep. Joey Sarte Salceda (2nd District) of Albay, Gov. Al Francis Bichara, Mayor Victor Perete of Daraga while RDC chairman and Legazpi City Mayor Noel Rosal was not able to attend the event after the result of RT-PCR test was not release before the arrival of the President.

The said kiosk in the newly built airport will make air travel experience for the passengers more convenient and comfortable once it commences commercial operations on 8 October 2021.

Rep. Joey Salceda said that Bicol International Airport can make the municipality of Daraga into a city, making Albay with four cities once the cityhood bid is approved.

Salceda is pushing for the cityhood of Daraga town with the operation of BIA. The lawmaker has been pushing for the completion of the facility since the time of President Gloria Arroyo as the flagship project in Bicol.

“With about P150 million annual income and about 2,000 direct and indirect jobs to be generated, the Bicol International Airport can make the municipality of Daraga into a city,” Salceda said.

The current 2.2 million passenger capacity is also expected to be increased to five million in the next five years, he said.

“The BIA is the most instagrammable airport in the entire country. Nothing beats the Bicol region,” Salceda said during the inauguration of the BIA in Albay led by President Rodrigo Duterte.

Salceda said the BIA will be operated and comanaged by Aboitiz Infracapital and DAA Inc. (the managers of Dublin Airport of Ireland) as a package along with the Panglao (Bohol) and Laguindingan (Misamis Oriental) airports.

While the old 74- hectare Legazpi Domestic Airport terminal according to Salceda, would be transformed into a new Legazpi central business district wherein the development plan is on the drawing board.

Non-stop construction works on the international airport came alongside the installation of critical energy infrastructure as the Albay Power and Energy Corp. (APEC) is now doing the final modification in time for BIA’s official operations.

The APEC’s Technical Services Team unload Feeder 4 of the Washington Substation last Oct. 9, while Tabon-tabon Daraga to Villa Hermosa will be transferred to Feeder 3 in the same substation.

Cynthia Tumanut, CAAP Legazpi City manager, said in a recent forum that the agency had assured that BIA would be opened to domestic night flights on Nov. 7.