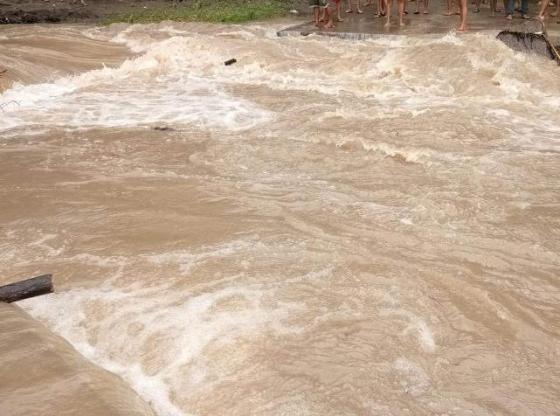 “You are directed to conduct preemptive evacuation of all families living in flood-prone and landslide-prone areas,” Villafuerte said.

He directed disaster officials to observe protocols during the evacuation such as to ensure that transport vehicle used during evacuation will not exceed the maximum number of passengers per vehicle observing standard health protocols; ensure that the evacuees are wearing facemasks and face shields; COVID-19 facilities should not be utilized as evacuation centers; and ensure availability of rooms to be utilized by evacuees with above 37.5°C body temperature.

In Guinobatan town, a volcanic material remobilized along the road of Masarawag Village on Saturday morning following the heavy rainfall brought by weather disturbance.

The Office of Civil Defense in Bicol reported that while there is no Tropical Cyclone Wind Signal (TCWS) in Bicol, there were reported flash floods in some parts of the region that rendered several roads impassable to the motorists.

Yucot said that five local roads in the municipalities of Nabua, Baao and Buhi in Camarines Sur were reported not passable as of 11:00 am due to flooding.

Light to moderate with occasional heavy rains is affecting Camarines Sur due to the Southwest Monsoon.

The disaster officials in Iriga City also reported that the spillway between Barangay (village) San Jose and Sagrada village and the Waras Bridge were not passable.

The Philippine Atmospheric Geophysical and Astronomical Services Administration (Pagasa) said in its advisory at 4:15 a.m., it said that moderate to heavy rainfall with lightning and strong winds were experienced in towns of Baleno, Milagros and San Pascual in Masbate; towns of Bula, Baao and Nabua in Camarines Sur; Ligao City, Oas and Pio Duran in Albay; Catanduanes island province and Northern Samar.

At 8 a.m., Pagasa also warned of light to moderate rains triggered by southwest monsoon in Camarines Norte, Camarines Sur, Albay, Sorsogon, Masbate and Catanduanes in the Bicol region; and in Northern Samar, Romblon and Marinduque.

While the OCD Bicol also reported that at 3:00 AM today, the center of Tropical Depression “ESTER” was estimated based on all available data at 790 km East of Itbayat, Batanes (21.6°N, 129.4°E) with maximum sustained winds of 45 km/h near the center and gustiness of up to 55 km/h.