Mangacop clan requests NBI for an autopsy of Amierkhan’s remains 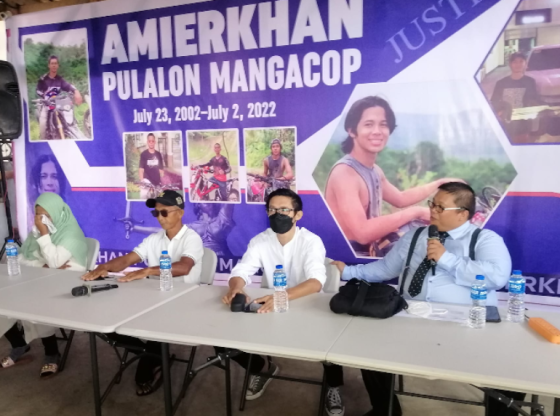 The legal team of the Mangacop clan, led by Atty. Gibb Andrew Cabahug, confirmed Tuesday afternoon, July 12, that the family has formally requested the National Bureau of Investigation (NBI) XI to conduct a postmortem examination on Amierkhan’s cadaver.

In a statement, the legal team said that the family was at first reluctant to request an autopsy “due to religious and cultural reasons.”

“But in the quest to fight for justice for the death of Ameirkhan, the Mangacop Clan acceded to the exhumation (of his body),” the statement added.

On Friday, July 8, NBI XI confirmed that they will conduct a parallel investigation on the killing of Amierkhan. NBI XI Spokesperson Ely Liano added that they have 10 days to thoroughly investigate the case following an order from the Office of the City Prosecutor.

Amierkhan’s family and friends were thankful for Silo’s pronouncement. They are also hoping that following the statement, the police will cooperate with the NBI by giving the evidence, reports, and other documents that the agency needs for its investigation on the crime.

Amierkhan Mangacop, aged 19, was shot 10 days ago by Dr. Marvin Rey Andrew Pepino, a non-uniformed personnel of PRO-Davao, outside Lugar Cafe and Bar in Davao City following a commotion at the said establishment.