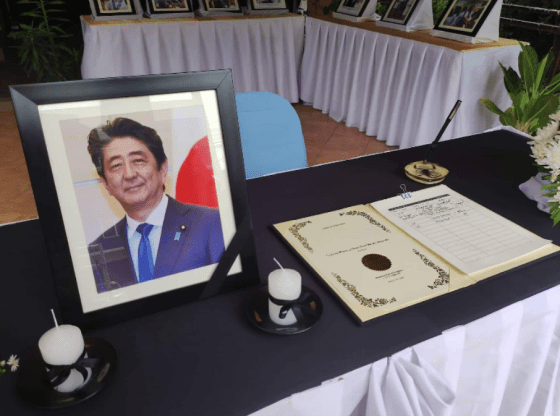 On Sunday evening, July 10, MKD made an announcement through their official Facebook page that they will observe a three-day mourning period, beginning Monday, July 11, until Wednesday, July 13.

The institution opened a memorial area at their entrance lobby where the public could pay respects to the late Japanese leader and sign the book of sympathy.

“MKD hopes to be a place and space of comfort for all Nikkeijin (Japanese descendants) and the rest of the Davao City community during this time of remembrance and mourning,” MKD stated in their announcement.

MKD, along with the Philippine Nikkei Jin Kai International School (PNJKIS), were part of Abe’s itinerary during his visit in Davao City, one of the largest Nikkeijin communities in the Philippines, on January 13, 2017. This, for them, was an opportunity they will forever be grateful for.

“MKD will never forget the humility and sincerity that he had shown to all of our school officials, teachers, students, and parents during his historical and very memorable visit to our college. May Abe-sama rest in peace and condolences to everyone in his wonderful homeland,” MKD said upon learning about Abe’s death.

He was shot twice with a homemade weapon by Tetsuya Yamagami, 41, a former member of the Japanese Maritime Self-Defense Force. According to investigators, the motive was personal rather than political. Yamagami was charged with murder following the incident.