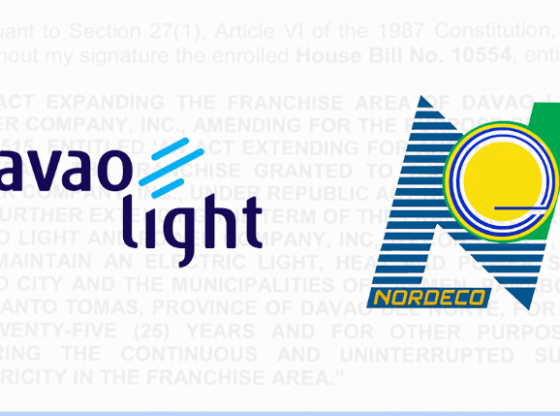 In a letter addressed to both Houses of Congress dated July 27, 2022, President Marcos cited Presidential Decree 269 to highlight the importance of the total electrification of the Philippines on the welfare of the people and the sound development of the country.

“I remain committed to the pursuit and attainment of this objective in a vigorous and systematic manner, with utmost respect for the concomitant rights of the public service entities engaged in supplying electric service,” said President Marcos.

He also mentioned that while he acknowledges the proposed legislation’s intent to improve the public’s electricity access, he vetoed the bill “due to the susceptibility of the proposed expansion of the franchise area of Davao Light and Power Company, Inc. to legal and/or constitutional challenge due to the apparent overlap and possible infringement into the subsisting franchise, permits, and contracts previously granted to North[ern] Davao Electric Cooperative Inc.”

He acknowledged that the existing franchises granted to NORDECO are set to expire in 2028 for Mainland Davao del Norte and in 2033 for the Island Garden City of Samal (IGACOS).

He added the proposal would violate Section 27 of Republic Act (RA) 9136 or the EPIRA Law, which mandates that “all existing franchises shall be allowed to their full term,” and the non-impairment clause as provided by Section 10, Article III, or the Bill of Rights of the 1987 Constitution.

However, Uy suggested that for the time being, the bill would only apply to their city.

On the other hand, DLPC and NORDEECO are yet to release their official statements on the vetoed bill.