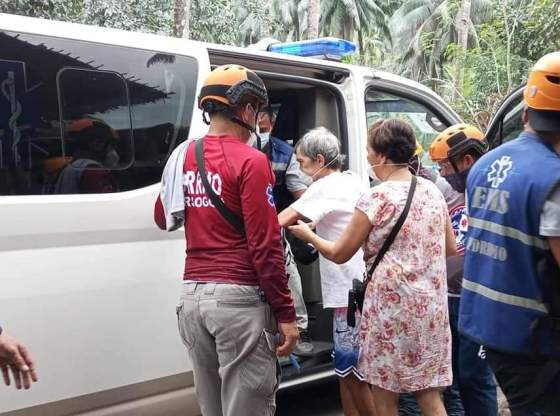 The PDRRMO along with the PNP personnel evacuated the residents of Puting Sapa village in Juban town on Friday.

The vulnerable communities of possible and sudden explosion of Bulusan volcano anytime due to increasing seismic activity prompted the disaster officials to enforced the pre-emptive evacuation to secure the communities from the worst impact of the explosion. The evacuated residents were brought to Tughan Evacuation Center for temporary shelter.

Senator-elect governor Francis “Chiz” Escudero ordered on Friday the residents not to venture within the five to six-kilometer extended permanent danger zone as the Bulusan volcano may explode anytime.
Escudero extended the five to six kilometers permanent danger zone from the original 4-kms PDZ following the increasing abnormalities exhibited by the restive Bulusan volcano.

(The disaster responders such as SPDRRMO, PEO, PNP, AFP, BFP and MDRRMOs are ready to evacuate those residents that might be affected in the municipalities of Juban, Irosin and Bulusan. The PSWDO and the provincial health office are also ready to provide water, food and medical needs.)

The Philippine Institute of Volcanology and Seismology (Phivolcs) Bulletin on June 10 warned the possible explosion of Bulusan volcano due to increasing seismic activity since yesterday and todate.

Since the occurrence of phreatic explosion on June 5, Phivolcs recorded the increasing activity of the restive volcano.
An increase in seismic activity at Bulusan Volcano. Since 5:00 AM today until as of this release, a total of 45 volcanic earthquakes including two (2) low-frequency volcanic earthquakes have been recorded by the Bulusan Volcano Network. Most of these were weak and shallow events, but may indicate that a phreatic eruption could possibly occur within the next few hours, Phivolcs bulletin said.

The public is reminded that Alert Level 1 status prevails over Bulusan Volcano, which means that it is currently in an abnormal condition.

Local government units and the public are reminded that entry into the 4-kilometer radius Permanent Danger Zone (PDZ) must be strictly prohibited and that vigilance in the 2-kilometer Extended Danger Zone (EDZ) on the southeast sector must be exercised due to the increased possibilities of sudden and hazardous phreatic eruptions.

The civil aviation authorities must also advise pilots to avoid flying close to the volcano’s summit as ash from any sudden phreatic eruption can be hazardous to aircraft. Furthermore, people living within valleys and along river/stream channels especially on the southeast, southwest and northwest sector of the edifice should be vigilant against sediment-laden stream flows and lahars in the event of heavy and prolonged rainfall should phreatic eruption occur.

The Department of Agriculture in Bicol recorded at least 16,854,052.27 damages on agricultural crops following the phreatic explosion on June 5, this year.
The sudden explosion affected to 3,28o families or 16,400 persons in the municipalities of Juban and Irosin due to ashfall. The Office of Civil Defense, DSWD, DOH regional office and local government units provided P17,428,344.34 worth of assistance to the affected communities. (Raydes B. Barcia)