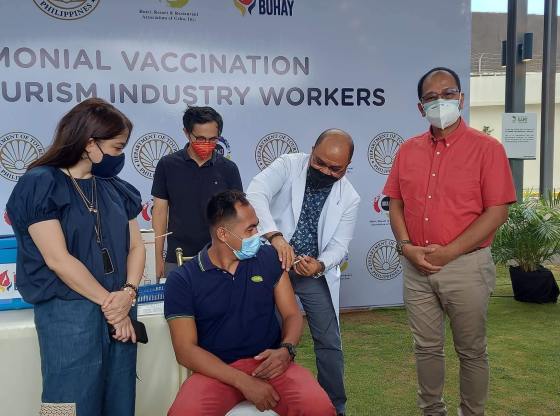 Vaccine Czar and National Task Force Against Covid-19 Chief Implementer Secretary Carlito Galvez Jr., revealed that around 50% of the tourism workers in Cebu’s highly urbanized cities have been vaccinated against Covid-19.

The highly urbanized cities are Cebu, Mandaue, and Lapu-Lapu.

In the ceremonial vaccination of Cebu Tourism Workers in Cebu today, September 24, Galvez said that the tourism industry has been a key driver and a major revenue earner of the country’s economy.

“The Province of Cebu is considered as one of the country’s top tourist destinations because of its world-class marine attractions, historic sites, and its mouth-watering cuisines,” Galvez said.

President Alfred Reyes were also present during the ceremonial vaccination at Oakridge in Mandaue City, Cebu.

Meanwhile, Visayas COVID-19 Vaccination Operations Center spokesperson Dr. Mary Jean Loreche said that several volunteers under the Cebu Vaccination Group will be in Bantayan Island, Cebu on October 1 to 3, 2021 to rollout their vaccination campaign in the island.

Bantayan Island is composed of three municipalities- Bantayan, Santa Fe and Madredijos. There are also several tourist spots in the island. (By: April Therese Tan)