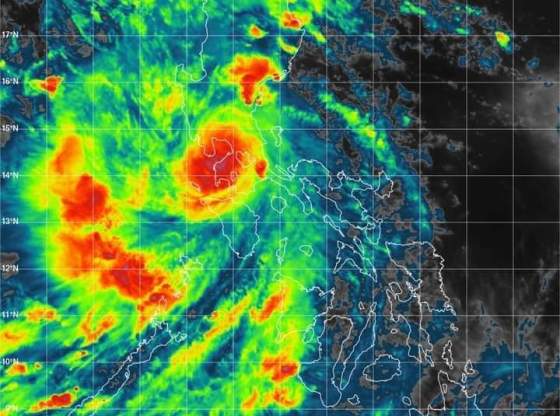 Legazpi City—Storm surges and strong winds flattened houses to the ground in the coastal towns of the island province of Masbate while thousands of people fled their houses for safety on Tuesday.

Masbate is the badly hit province among the six provinces of Bicol after Typhoon Jolina with (International name: Conson) battered the region on Tuesday.

The Office of Civil Defense in Bicol reported over 10,000 people in Albay and Masbate provinces fled their houses for safer grounds as Typhoon Jolina (International name Conson) pummeled the region dumping torrential rains in Masbate, Sorsogon and Albay.

Initially, Nas said that five houses were partially damaged in Uson town in Masbate. Masbate is the hardest hit in Bicol without electricity for more than 24 hours as power went out following strong winds and torrential rains pounded the island.

Maria Luisa “Malu” Calubaquib, PNP regional spokesperson said that the police personnel are working around the clock as it helps out the affected communities in the province of Masbate by Typhoon Jolina.

(More than 1,000 cops deployed for disaster response efforts across the region to assist our kababayans for evacuation. As of todate, Masbate is the hardest province wherein our policemen are working around the clock to help the Bicolanos badly affected by the typhoon).

Report said that a knee to waist deep high flooding hit in the coastal municipalities of Masbate due to torrential rainfall and was aggravated by storm surges occurrence.

In Albay, pre-emptive evacuation was enforced by governor Al Francis Bichara in anticipation of the impending threat of heavy to torrential rains brought by the typhoon.

Albay is now under TCWS No. 2 as Typhoon Jolina continues to move West Northwestward, closer to the vicinity of Albay with maximum sustained winds of 120km/h and gustiness of 180 km/h.

Bichara ordered the evacuation of the exposed population prone to flash flood, floods, debris flow, lahar and landslides including those living in houses made of light materials effective immediately.

But the governor directed the disaster officials and the public to strictly observe the health protocols to prevent the spread of coronavirus.

“Strict implementation of Covid19 health protocols should be observed. All local disaster risk reduction management councils (LDRRMCs) should be on heightened alert in their area of jurisdictions and to monitor the status of heavy rains through the PAGASA Legazpi and local broadcast media until the weather situation normalizes,” Bichara said in his directive.

But Bichara said that those involved in the public safety, disaster response, emergency response measures and medical services shall continue with their operations.

While grocery stores were allowed to operate until 12 noon on Tuesday. Claire Hariri, SM information officer said SM City Legazpi will be closed on September 7, 2021 due to typhoon Jolina but will accommodate anyone seeking shelter from the typhoon.