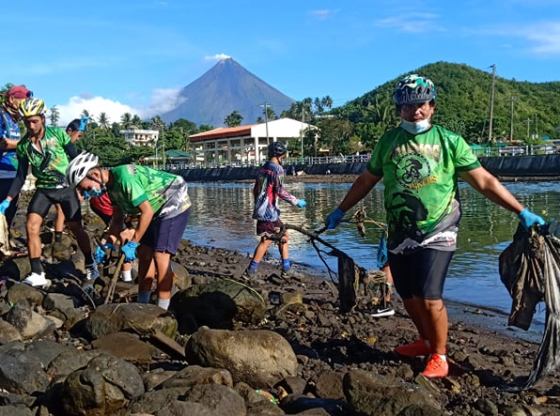 Legazpi City ––The Bureau of Fisheries and Aquatic Resources (BFAR) in Bicol asked the local government units across the region to enforce stricter laws on Ecological Solid Waste Management Act of 2000 after discarded facemasks, face shields, and plastic wastes littering the seabed of Albay Gulf.

Nonie Enolva, BFAR regional spokesperson along with the members of the Women in Maritime group and uniformed personnel plunged in Albay Gulf for scabasurero clean up drive in Rawis village, Makabalo River in DapDap and Sagumayon River in Daraga. Sagumayon River is a tributary of the river that drains to Albay Gulf at Barangay Dap-dap and Puro in this city.

Enolva’s plea came after they collected 150 kilos of rubbish during the coastal and river clean up drive following the observance of the International Coastal Clean-Up as one of the highlights of the Maritime and Archipelagic Nation Awareness Month and so as Fish Conservation Week commemoration.

The group collected about 150 kilograms of rubbish from the seabed of Albay Gulf in Rawis village, Makabalo River and portion of Sagumayon River for an hour clean up drive activities here.

Shortly after the clean-up drive, the group conducted waste characterization or waste audit where they fished out discarded facemasks, face shields and plastic wastes over the ocean’s floor of the Albay Gulf where a shoal of playful dolphins were seen swimming and frolicking the gulf.

Albay Gulf is home and playground of hundreds or thousands of dolphins because of the good source of food and biodiversity. Dolphins are swarming in Albay Gulf because of food like plankton and small pelagics.

According to Enolva, most of the dolphins swarming in Albay Gulf were Spinner dolphins, Striped dolphins and common Bottlenose dolphins. Marine mammals like dolphins migrate for two things: Food and sex for procreation.

Albay Gulf where the presence of endangered marine mammals stays from March to September or for 7 months is due to abundance of round scad, or “galunggong,” plankton, squids, shrimps, jellyfish, octopuses and kuwaw (red fish) in the area which serve as the dolphins’ food.

Dolphins eat a variety of fish, squid, shrimps, jellyfish and octopuses. They move and migrate in pods and hunt as a group that surround a shoal of small fish and crowd them together. But the disturbing plastic wastes, specifically facemasks and face shields, a protecting device against Covid-19 even aggravated the sea pollution.

Enolva said that around 80 kilograms of biodegradables are composed of leaves, twigs, branches and coconut husks and the rest are plastic wastes.

“What is disturbing is the impact of the COVID-19 pandemic as few discarded facemasks and face shields were also collected. Most plastic wastes consist of cellophane and food wrappers revealing the dependency of local households on small sachets that is also reflective of the socio-economic condition of the typical household,” Enolva said.

“If the garbage unabatedly dumped into the sea, marine species will be affected by plastic ingestion and entanglement. Although not much research is being made on microplastics, but there is already proof that the microplastics are accumulated in the bodies of some fishes which is harmful for human,” Enolva added.

But on a different note, Enolva lauded the city government of Legazpi as only few or 10 pieces of cigarette butts were collected which reveals the LGU’s effectiveness of the smoking ban in public places. Legazpi city government has stricter enacted laws on no smoking campaigns.

Legazpi City’s smoke-free program was enforced 12 years ago following the enacted local ordinance No. 0007-2009 or the revised smoke-free law, authored by former councilor and now Board Member Roly Rosal.

The ordinance was enacted by the Sangguniang Panlungsod and approved by former Mayor Geraldine Rosal in 2009, wife of Mayor Noel Rosal. The city government of Legazpi is also strictly implementing the waste segregation mandated under the solid waste management.

Following the recovery of facemasks, face shields and plastic wastes the group is lobbying the Sangguniang Panglunsod and to Mayor Noel Rosal to craft concrete action plans to address the pressing issue on solid waste disposal and in consonance with RA 9003.

Enolva hopes that the local government units in Bicol would craft concrete legislative action to address the proper waste disposal.

“Hopefully, each city and municipality in the region would craft concrete action plans for at least 10 years to address pressing issues on solid waste disposal and segregation,” she said. (By: Raneza Sabina Barcebal)