First day of school confronted with a lack of classrooms, facilities, and teachers

Home /Nation/First day of school confronted with a lack of classrooms, facilities, and teachers 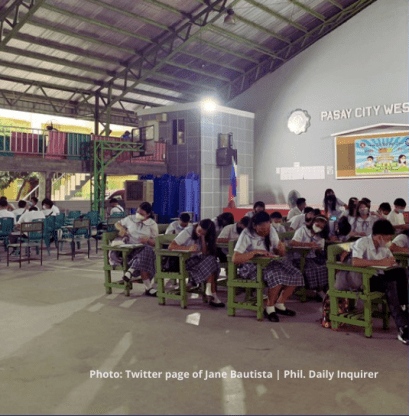 After two years of Covid-19 pandemic restrictions, is the Philippines ready for face-to-face classes?

Various challenges awaited both students and teachers returning to their in-person classes on August 22, the first day of classes in the majority of schools in the Philippines.

Bautista captioned a video clip of students sitting on the floor of their classroom, as follows:

“Due to the shortage of armchairs, Grade 7 students from Jose Abad Santos HS in the city of Manila are seated on the floor for the first day of their in-person classes,” she said.

Likewise, she described in the second photo that because there are not enough chairs to seat all 43 students, the teacher decided they should all sit on the floor.

“In another classroom, some students have tables and chairs while others are seated on the floor,” the caption reads for the last photo.

“Some senior and junior high school students of Pasay City West High School attend the first day of face-to-face classes at the school’s covered court. The open space was divided into four sections to accommodate the learners,” she wrote.

The above said posts went viral and were widely shared on the internet. Different reactions were expressed by netizens:

“It’s 2022 and this is unacceptable. Shortages such as these have been present before. There were two years of online classes when the DepEd could have addressed this.” #DemandAccountability

“Why?! May enrollment and a master list of studs, pero kulang ang basic needs. Why would you insist on f2f if you can’t provide for the basic needs of students in the classroom? How does the government expect them to learn? @DepEd_PH for PH’s and goodness sake, please naman.”

“I challenge all DepEd officials to work the whole day while sitting on the floor at their offices. If our public school students cannot even have a seat and a table in the classroom, you shouldn’t as well.”

“Heartbreaking scenes on the 1st day of class in the Philippines. Pressing issues beyond ROTC today: unsafe roads leading to schools, subpar textbooks, lack of classrooms and furniture, underpayment of teachers, and unclear guidelines regarding safety protocols. Your move, DepEd.”

“On the part of DepEd, may kakulangan siguro sa assessment, and they also failed to lobby to Congress the needed number of additional public schools to meet the demands of the population.”

“As a teacher,  I can’t imagine telling my student: so this year you’ll sit on the floor and ruin your back cause we don’t have enough chairs. I probably ally with another teacher to start a donation campaign (and make sure to make it viral for showing the incapacity of DepEd)”

“My ate literally had to spend 21k from her pocket for the classroom facilities because the PROJECTORS and the ELECTRIC FANS in her room aren’t working. Nakakaawa public schools. Please fix this.”

“Still denying the lack of chairs in schools?? DepEd had all the time to plan the return of f2f classes but unfortunately, their priorities are twisted. ROTC seems to be the priority. How insensitive!”

“Funny memes on the first day of face-to-face classes won’t cover the fact that the Philippines is not yet ready for this. People are sitting on the floor kasi kulang ang mga upuan. Crazy! DepEd, keep-up naman. 2022 na.”“Fault ng mismo school faculty yan for lack of checking. Alam na papasok na bakit di ginawa yan. Is it intended or not to blame the DepEd?”

“I challenge all DepEd officials to work the whole day while sitting on the floor at their offices. If our public school students cannot even have a seat and a table in the classroom, you shouldn’t as well.”

Several schools faced challenges as classes for the School Year 2022-2023 began on Monday, including a lack of classrooms and teachers.

According to GMA News, many schools encountered difficulties as classes for the School Year 2022-2023 began on Monday, such as a lack of classrooms and teachers.

It is worth noting that the DepEd budget for 2023 will be P852.8 billion, according to a tweet from the Philippine Star, the highest budget mandated by the Constitution. (Photo: Twitter page of Jane Bautista | Phil. Daily Inquirer)