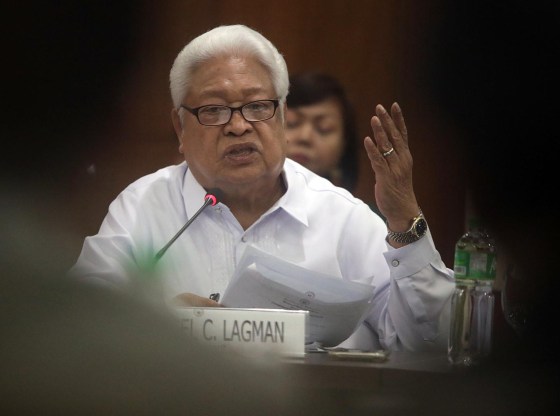 Legazpi City – As the country ruminates the 50-year declaration of totalitarian rule, opposition and veteran lawmaker Edcel C. Lagman (2nd District) of Albay said that martial law is a recollection of repression, infamy, and corruption.

“Fifty years constitute a golden jubilee, a celebration of life for half a century. But for the imposition of martial law on September 21, 1972, five decades recall years of infamy, repression, corruption, and economic despoliation – the darkest years in Philippine history,” the lawmaker said in a statement.

Mankind celebrates both anniversaries of bliss and liberation as well as years of despair and subjugation.

According to Albay veteran lawmaker commemorating the horrors of the past instills in us the obligation to guard and be vigilant against its recurrence. Remembering will make it more difficult to normalize violence and injustice.

We must never forget the tragic and horrific past where friends and kin suffered to torture, extra-judicial killings, and enforced disappearances for their convictions and heroism. “I remember and continue to honor the memory of my brother, Atty. Hermon Lagman, the first lawyer to be forcibly disappeared during martial law on May 11, 1977,” Lagman said.

Lagman told the Filipino people to always remember the years of state terrorism by a dictator. For courageously challenging aboveground the martial law regime and its disastrous consequences on civil liberties and the national economy and for his resolute crusade to promote and protect the rights of workers, Mon was forcibly disappeared by agents of the state and is still missing after 45 years.

“As we firmly resolve never to allow this national tragedy to again besiege us. Remembering will help foreclose the propensity of people to turn a blind eye to official corruption and misconduct. Remembering is honoring the victims and survivors of martial law and celebrating their lives and sacrifices,” he said.

“Remembering helps counter revisionist attempts to deodorize the dictator’s odious regime and sanitize the sins of the Marcoses against the Filipino people. Remembering is essential in demanding accountability. The memory of both the horrors of martial law and the courage and conviction of its victims and survivors must be indelible in our history,” Lagman said.

The lawmaker said that the slogan “Never Again” is not used exclusively to refer to martial law in the Philippine context as it was first used as a battle cry against the horrors of the Holocaust, and later genocide and tyranny in general.

Lagman said that Filipinos must resist all attempts of historical revisionism and self-serving sanitizing in literature and the arts, including cinematography.

Lamentably, Lagman said the sins of the Marcos Sr. dictatorship – the grievous human rights violations, unrestrained cronyism, the plunder of the economy, the negative economic growth are barely taught in educational institutions especially in the basic education level, despite the provision under R.A. 10368 or the “Human Rights Victims Reparation and Recognition Act” for “DepED and the CHED to ensure that the teaching of martial law atrocities, the lives, and sacrifices of Human Rights Violations Victims (HRVVs) in our history are included in the basic, secondary and tertiary education curricula”.

“With the advent of troll farms cultivated by the beneficiaries and enablers of martial law, among others, what is “heard” and “learned” by our youth are sadly twisted facts and outright lies about the Marcos Sr. regime deviously and massively peddled mainly online by paid perfidious mercenaries masquerading as truth preachers,” the lawmaker said.

Filipinos can forgive but should never forget the atrocities and despotism of martial law. Widespread amnesia of the abhorrent abuses and inordinate profligacy of the martial law era must be cured and jettisoned as a national malaise.

It is both a prayer and a promise that we will never forget the tragedy of martial law and that evil will never again be allowed to thrive. We should not forget the perpetrators and beneficiaries of martial law until they admit their odious crimes and show contrite repentance.

Contrite apology and genuine repentance according to Lagman are demanded of martial law’s perpetrators and beneficiaries in order to eventually achieve this administration’s much-ballyhooed call for national unity.

Acknowledging and rectifying the errors and excesses of the past is a condition precedent to forging national unity as what Germany and Spain did on the respective odious regimes of Adolf Hitler and Francisco Franco.

“It seems that instead of apologies and repentance, the main beneficiaries of martial law are determined to whitewash these blood-stained and repugnant years as they continue to encourage negative historical revisionism by purging the sins of Marcos Sr., his cronies, and the Marcos family by sweeping them under the filthy rug of historical perfidy,” he said.

Last September 15, it was reported that President Ferdinand Marcos, Jr. denied that his father was ever a dictator because of so-called “consultations” regularly conducted by his father in Malacañang.

“When an authoritarian leader with vast powers consults with favored sectors, these stakeholders will merely concur with the despot’s self-serving desires or decisions. In the context of the Marcos martial law when dissent was conveniently stifled, consultation inevitably was a farce,” the lawmaker said.

It should be recalled that upon his declaration of martial law, Marcos Sr. padlocked Congress and exercised legislative powers by issuing a series of executive issuances that have the force of law without any consultation with the people or concerned stakeholders.

“Filial defense is understandable but history does not lie in documenting the dictatorship of Ferdinand Marcos, Sr. during his martial law regime. His son’s denials do not and cannot change the horrors of the past. It cannot repeal statutes and overturn Supreme Court decisions indubitably documenting the atrocities and banalities of the Marcos dictatorship,” Lagman said.

It must be conceded that the President has the right to his own opinion but he does not have a right to his own reality. For as long as President Ferdinand Marcos, Jr. persists in denying the undeniable dictatorship of his father, then Marcos, Jr. will forever be known as the “Son of the Dictator Marcos!” he added.