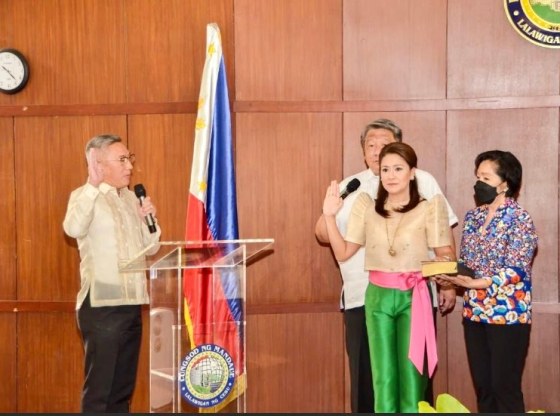 The first congresswoman of Mandaue City Lone District, Emmarie “Lolypop” Ouano-Dizon took her oath of office on Wednesday, June 8, 2022, in the presence of the members of the City Council and majority of the city’s barangay captains.

Together with her immediate family, Ouano-Dizon took her oath of office before Mandaue City Mayor Jonas Cortes.

It can be recalled that it was Cortes, then the representative of Cebu Sixth Congressional District who filed the bill separating Mandaue City from the said district.

Aside from Mandaue City, the sixth district includes the towns of Consolacion and Cordova.

Ouano-Dizon, the incumbent sixth district congresswoman in an interview after the oathtaking said that she will continue to push for the realization of her proposed P1.5 billion underpass, a flyover, and another road-level passage for vehicles that will be constructed at the existing road space in the congested corner of Pacific Mall in Mandaue City.

House Bill No. 9886 or “An Act providing for the construction of the tri-level interchange along M.C. Briones St., corner U.N. Avenue, Mandaue City, Province of Cebu and approproating funds therefore,” principally authored by Ouano-Dizon was already approved at the Lower House.

Ouano-Dizon, daughter and grandaughter of former Mandaue City mayors Thadeo Ouano and Alfredo Ouano, respectively, is thanking all the Mandauehanons for their continued support.