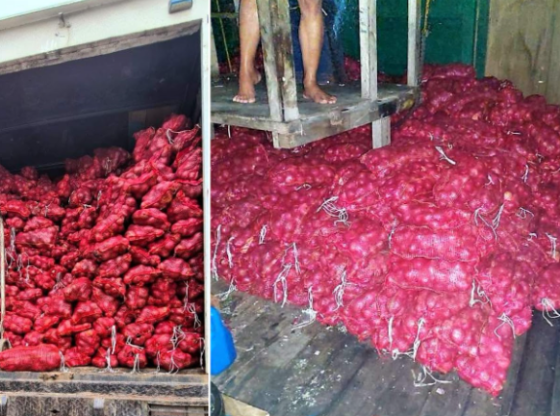 Amid the ongoing red onion crisis in the country, approximately 44,000 kilos of illegal red onions were discovered by law enforcement on January 23 in a dockyard in Varadero de Cawit, Barangay Cawit, Zamboanga City, according to a press release from the Philippine Navy’s Naval Forces Western Mindanao.

The smuggled onions were discovered on the same day that the Department of Agriculture announced the anticipated arrival of the first batch of such imports into the country.

A total of 11,000 mesh bags of red onions, weighing four kilograms each, were seized from  a closed-van cargo truck and a wooden vessel named MJ MARISA.

Meanwhile, they also confiscated at least 300 drums of smuggled petroleum, oil, and lubricant products from a water vessel named ML ZHARY on the same day.

However, the consignees of the contrabands, the place of origin, and the owners of the seized vehicles have all yet to be identified by the Naval Forces Western Mindanao.

All of the confiscated items are being inventoried in preparation for transfer to the appropriate agency.