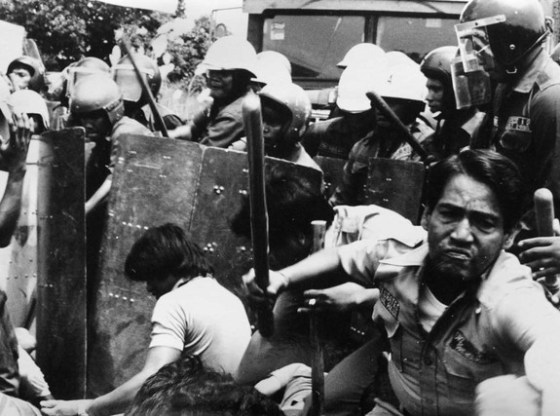 Hundreds of participants belonging to various organizations from basic sectors, political blocs and parties participated in a one hour “Stand Up Silent Protest” to commemorate the 49th anniversary celebration against Martial Law today, September 21 which started at 9am and lasted until 10am.

“The lessons learned of  Martial Law should not be forgotten and should be passed on to the young generation. Never again to Martial Law and Elite Rule must come to an end,” said Teody Navea, Sanlakas Cebu Secretary General.

Also, progressive groups under Bagong Alyansang Makabayan (BAYAN)-Central Visayas marched to Colon St. to condemn the atrocities of the Duterte regime and to strongly call for Duterte’s ouster.

BAYAN-Central Visayas emphasized that the fact that Duterte is merely following in the footsteps of the late dictator Marcos is proof that nothing has changed in the 49 years since Martial Law.

“It is proof that Duterte did not bring change as he promised during his campaign and has even worsened the country’s political situation,” said Jaime Paglinawan, the spokesperson of BAYAN-Central Visayas

BAYAN-Central Visayas also expressed support for the investigation of the International Criminal Court (ICC) into the human rights violations of the Duterte regime. (By: April Therese Tan)