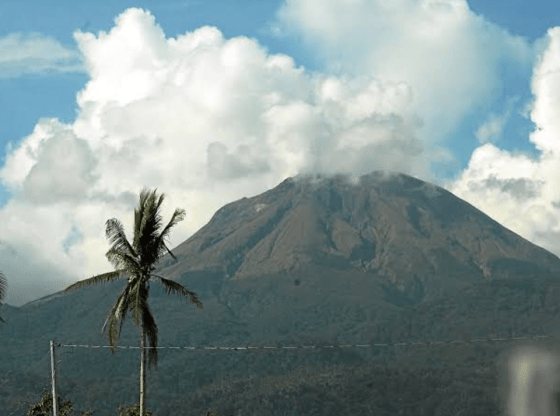 The Bulusan volcano phreatic eruption before dawn at 3:37 am blanketed more towns in Sorsogon province and reached as far as Albay province on Sunday before dawn here.

Due to this, the Civil Aviation Authority of the Philippines (CAAP) in Bicol ordered the cancellation of all domestic flights at Bicol International Airport in Daraga town following the eruption of Bulusan volcano on Sunday which coincided with the 124th Philippine Independence Day.

“BIA report on cancellation of flights due to Mt. Bulusan eruption, June 12, 2022,” the CAAP Bicol said in its advisory posted on FB wall on Sunday.

At least eight flights from Legazpi-Manila vice versa were affected by sudden cancellation of flights here.

Due to this, all domestic flights of Philippine Airlines and Cebu Pacific were cancelled affecting more than 1,000 passengers following the force majeure.

All domestic flights at BIA in Daraga Albay were canceled on Sunday following the threats that Bulusan volcano’s phreatic eruption poses to the aircrafts.

The steam-driven or phreatic eruption of Bulusan Volcano that took place from 3:37AM to 3:55AM dumped heavy ashfall in Sorsogon and reached as far as Albay province specifically in Legazpi City on Sunday.

The ashfall brought by the Bulusan volcano phreatic eruption in Sorsogon province on Sunday before dawn reached neighboring Albay province.

Similarly, an ash fall is reported in the barangays of Maalo, Cogon and South Poblacion of Juban town and other areas of Irosin and Casiguran municipalities. Currently there are 103 families or 338 persons evacuated in Juban town and 37 persons from Bulusan municipality.

Immediately after daylight, outgoing Sorsogon governor and Senator-elect Francis ‘Chiz’ Escudero has ordered the Bureau of Fire Protection, cops and soldiers to clear the national highways blanketed by ash fall from the phreatic eruption of Bulusan Volcano on Sunday morning, June 12.

“The DRRMOs of affected municipalities including the provincial government have been activated to evacuate vulnerable people, check for respiratory concerns, and immediately start clean-up with elements of the BFP, AFP, PNP and via our food-for-work program,” Escudero said.

Escudero tapped the residents to help the clean up drive through the food-for-work program of the province to prevent the possible accident due to heavy ashfall in the main thoroughfares.

Hamor provided food packs to the barangays affected by the explosion of Bulusan volcano. Hamor first visited Mabini village in Casiguran where thick ashes fell from the Bulusan Volcano.

Pilar town Mayor Carolyn Sy-Reyes also asked the public to wear masks at all times after ash fall has reached some areas of place.

The Philippine Institute of Volcanology and Seismology (Phivolcs) said Bulusan had another phreatic eruption at 3:37 a.m. that lasted for 18 minutes.

In its advisory, the Philippine Institute of Volcanology and Seismology (Phivolcs) said Mount Bulusan generated 136 volcanic earthquakes in the past 24 hours.

Phivolcs warned the local government units and the public not to venture or entry into the 4-kilometer radius Permanent Danger Zone (PDZ) must be strictly prohibited and that vigilance in the 2-kilometer Extended Danger Zone (EDZ) on the southeast sector must be exercised due to the increased possibilities of sudden and hazardous phreatic eruptions.

People living within valleys and along the river/stream channels, especially on the southeast, southwest, and northwest sector of Bulusan’s edifice, were advised to be vigilant against sediment-laden stream flows and lahars in the event of heavy and prolonged rainfall should a phreatic eruption occur.

The public is directed to take precautionary measures since the Alert Level 1 status remains over Mount Bulusan. Civil aviation authorities advised pilots to avoid flying close to the volcano’s summit as ash from any sudden phreatic eruption can be hazardous.(Raydes B. Barcia)