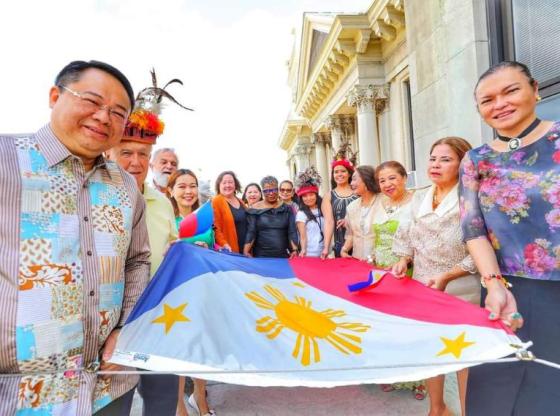 Legazpi City—-As the Philippines commemorate the 124th Independence Day, Filipinos in the United States joined the celebration of the country’s celebration through raising a Philippine flag in different states of “Apple country”.

“This is the second time I participated in this ceremony that Jersey City holds annually to honor the members of the Filipino Community on the occasion of Philippine Independence Day,” Cato said on his FB post.

Jersey City hosts one of the largest Filipino communities in the East Coast, he said.

“On Thursday morning, we joined our kababayan in raising the Philippine flag at Jersey City Hall,” he said.

Cato said that Filipinos in the US were able to celebrate the Philippine Independence Day two years after the Covid-19 restrictions laidback.

“We would be commemorating the 124th anniversary of the declaration of Philippine independence with the annual Independence Day Parade along Madison Avenue,” the Consul General said.

“This is the biggest Independence Day parade outside the Philippines. We will be celebrating it for the first time in two years,” he said

Cato urged the Filipino-Americans to pay tribute to the country’s culture.

“We encourage our kababayan in New York and other states in the United States Northeast to come and join us in celebrating our history and culture,” he said.

“We strongly urge our kababayan participating tomorrow as spectators or marchers to wear our national colors—the colors of the Philippine flag. Let’s show how proud we are as Filipinos! Mabuhay ang Republika ng Pilipinas!” Cato added.(Raydes B. Barcia)