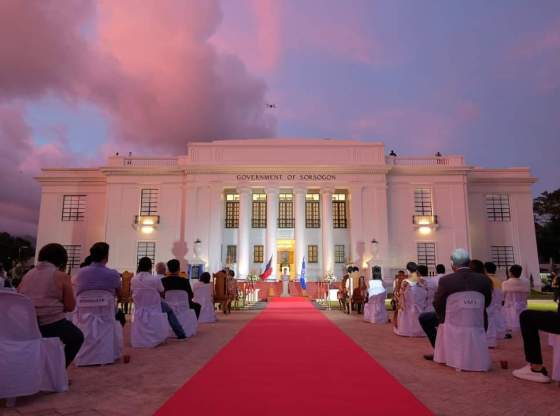 Sorsogon City—For the first time in Bicol history, the century old neo-Classic design edifice of Sorsogon provincial capitol built in 1916 will be opened to the public for 24-hour here.

The all-white edifice resembles the United States White House and the Lincoln Memorial in Washington, DC.

Gov. Chiz Escudero led the blessing and inauguration of the provincial capitol building which has been restored and renovated to its original architectural plan when it was built in 1916.

Gov. Chiz Escudero said that for a short span of his incumbency he started to establish the provincial museum to showcase and take care of its local culture to see where they came from. An airconditioned gymnasium to be used by the people for remarkable events.

“This is the last part of the physical structure development of Sorsogon. This is a building not only of the governor, the SPA or employees. This is yours, treat it as yours, a million dreams, this is me,” Escudero said.

The Sorsogon provincial capitol building is considered an important cultural property under Republic Act No 10066 was restored by the Department of Public Works and Highways.

The restoration works were done by Centerways construction and Development Inc., and was supervised by the National Historical Commission of the Philippines to ensure conformity with accepted conservation and restoration standards.

“I officially declare that the people’s capitol is now open to serve all Sorsoganons. This is your building, our building,” Escudero said.

Restored to its full glory, Escudero urged the people of Sorsogon to help in maintaining the beauty of the structure and entire complex that the future generations of Sorsoganon will enjoy and love.

But more than the aesthetics, Escudero expressed hope that the capitol building the seat of power of the provincial government will be an enduring testament to good government and genuine public service.

“It is my hope that the future governors of this province will hold in their hearts what this century old building stands for, mabuting pamahalaan at tunay na serbisyong publicko para sa ating mga kaprobinsnsya,” he said.

“I envisioned the provincial capitol to be open 24 hours so that people can visit, walk through the corridors and hallways, go to the deck and have a beautiful view,’ Escudero said.

The original architectural plan that was designed by Architect William Parsons, was a rectangular structure. The building was erected in 1916 during the term of Gov. Victor Eco with the help of Architect George C. Genhagen, B. F. Mills as the contractor and under the supervision of then District Engr. H. B. Liley.

The structure is considered a jewel of American architecture that is reminiscent of the United States White House and the Lincoln Memorial in Washington, DC, the all-white edifice stands proudly in the middle of the 12-hectare capitol complex at the heart of the city.

Notable Filipino architects Juan N. Arella and Tomas Mapua were responsible for the maintenance of the entire complex that also included the provincial jail and courthouse.

“Our job was to restore and expand it, following the same neo-classical design in order to maintain the structural integrity and visual prowess of the building as it was originally constructed 105 years ago,” Escudero said.

“Today the provincial capitol building is already a complete structure based on the original plan, with fully restored neo-classical features but with state-of-the-art offices and facilities.

The capitol facilities are a blend of modern technology with an array of paintings from ground to second floor.

Dong Mendoza, spokesman of Sorsogon provincial government said that Escudero tapped all Bicol artists for a competition to showcase its remarkable talent.

Today, the people’s capitol is not only the state of the art facilities but with a blend of Bicol culture that will be opened to the public 24 hours a day. (By Raneza Sabina Barcebal)