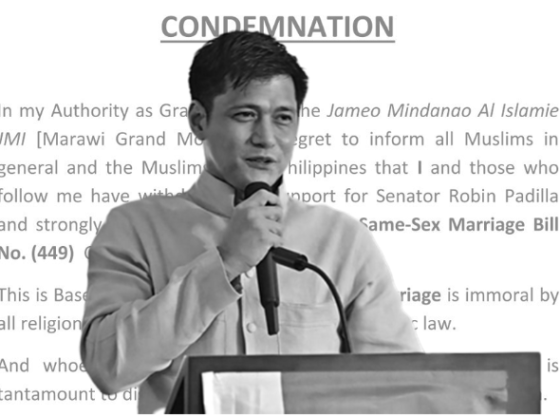 By Jim Lloyd Dongiapon
––
Senator Robinhood “Robin” Padilla, also known as “Abdul Aziz” and the only incumbent Muslim senator in the 19th Congress, loses the confidence of the Grand Imam of Jameo Mindanao Al Islamie (Marawi Grand Mosque) over a proposed legislation allowing same-sex unions in the country.

In a letter of condemnation, Grand Imam Alim Abdulmajeed Djamla stated that he and his followers no longer support Padilla and they “strongly condemn” his sponsorship of Senate Bill No. 449, or “An Act Institutionalizing Civil Unions of Same Sex Couples, Establishing Their Rights and Obligations, and For Other Purposes.”

“This is based on the doctrine that same-sex marriage is considered immoral by all religions ang is forbidded (Haram) under Islamic Law,” he added.

Djamla further said that “whoever commits such [an] act from among the Muslims is tantamount to disbelief (kufr), which is outside the creed of Islam.”

However, Padilla refused to counter the reactions of various Muslim groups to the bill.

“Sila po ang nakakaalam ng tama at mali sa ating pananampalataya. Kailanman man po hindi ko sasalungatin ang kanilang mga pahayag ng pagtutuwid. Bagkus nagpapasalamat po ako sa kanilang mga paalala at pahayag. Alhamdulillah jazakum allah khayran (They know what is right and what is wrong in our faith. I will never contradict their statements of correction. Instead, I am grateful to them for it. Thank God, and may Allah reward you),” he said in his statement posted on his official Facebook page Sunday, August 14.

He also expressed that the intention of the bill is to discuss the rights of a community, in this case, the LGBTQIA+ (lesbian, gay, bisexual, transgender, queer/questioning (one’s sexual or gender identity), intersex, and asexual/aromantic/agender) community.

He added that the bill is open for discussion and all stakeholders can share their sentiments during hearings.

“Ang lahat ay pantay-pantay. Ang lahat ay may puwang sa ating saligang batas. Ang panukala po na ito ay dadaan sa napakahabang proseso ng pagdinig kaya’t ano man po ang inyong hinaing, mainam po na ihanda ang sarili at inyong organisasyon at makiisa po sa debate sa pagdinig nito (Everyone is equal. Everything has a place in our Constitution. This proposal will go through a very long process. So, no matter what your grievance is, it is good to prepare yourselves and your organization in joining the debate in its hearing),” he continued.

Marriage in the Philippines must only be between a man and a woman, according to the Family Code. The same-sex union bill, on the other hand, would give LGBTQIA+ couples the same privileges as heterosexual couples, such as adoption rights, tax exemptions, labor advantages, property rights, and inheritance without actually defining them as “married.”

Padilla’s explanatory note said human rights and international legal rights must be accorded to same-sex couples. He continued by saying that even though the 1987 Constitution does not specifically mention sexual orientation, gender identity, gender expression, or sex characteristics, it does not forbid or exclude civil partnerships between same-sex couples.