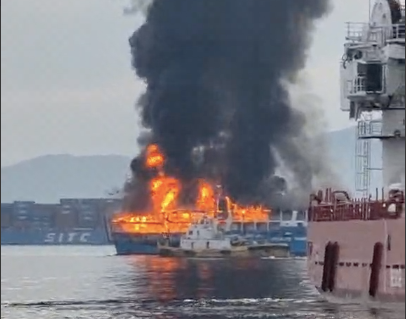 Legazpi City—The Philippine Coast Guard (PCG) is conducting a massive search and rescue effort to save the passengers of MV Asia Philippines, RoRo vessel that caught fire about one nautical mile off the Batangas seaport on Friday before twilight.

According to the Philippine Coast Guard (PCG) station in Calapan City, the MV Asia Philippines was carrying 48 passengers and 34 crew members or a total of 82 individuals onboard, when the fire incident took place in the vicinity of waters off Batangas City port today, August 26, 2022.

The MV Asia Philippines caught fire at 5:59 pm on Friday, at least one nautical mile off the Batangas port. The Philippine Coast Guard said that as of 7:30 pm, 73 individuals were rescued, with one brought to the nearest hospital due to an injury.

Search and rescue (SAR) operation is still ongoing. Aside from 82 onboard individuals, the vessel is loaded with 16 rolling cargoes.

Oriental Mindoro Governor Humerlito “Bonz’ Dolor said in a statement through his FB wall that he received information that the Starlite ship is on fire near the Batangas pier with no casualties reported so far.

“In the middle of my speech I received news that a Starlite ship is currently on fire near Batangas pier. We will know the situation right away. Hoping no passengers or crew were hurt,” he said on his FB post.

As of this writing, rescue operation is ongoing with no casualties so far , Dolor said.

Quoting the report, the governor said that the RoRo departed in Calapan at 3:00 PM with 48 passengers and 34 crew members with 7 private vehicles; two motorcycles and seven trucks.

The MV Asia Philippines is under the Starlite ferries umbrella. (Raydes B. Barcia)