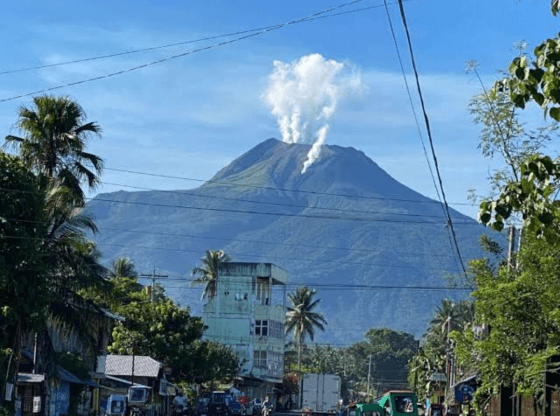 Legazpi City—Few days after lull period, the Philippine Institute of Volcanology and Seismology (Phivolcs) warned the residents in Sorsogon living within the  5 to 6 kilometers extended permanent danger zone to be on guard following the increasing seismic activity of the restive volcano.

At 11:45 on Monday before midnight, Phivolcs issues an advisory the increasing events of Bulusan volcano on Monday generating 65 volcanic earthquakes.

“Most were weak and shallow events, but may indicate that a phreatic eruption could possibly occur within the next few hours to next few days,” Phivolcs said on Monday midnight here.

The Bulusan Volcano erupted twice this month (June 5 and 12) ejecting ashes in the skies affecting thousands of residents specifically those residing in the towns of of Juban, Irosin, Casiguran  and Magalanes  towns

The public is reminded that Alert Level 1 status prevails over Bulusan Volcano, which means that it is currently in an abnormal condition.

Phivolcs warned the local government units and the public are reminded that entry into the 4-kilometer radius Permanent Danger Zone (PDZ) must be strictly prohibited and that vigilance in the 2-kilometer Extended Danger Zone (EDZ) on the southeast sector must be exercised due to the increased possibilities of sudden and hazardous phreatic eruptions. Civil aviation authorities must also advise pilots to avoid flying close to the volcano’s summit as ash from any sudden phreatic eruption can be hazardous to aircraft.

Similarly,  people living within valleys and along river/stream channels especially on the southeast, southwest and northwest sector of the edifice should be vigilant against sediment-laden stream flows and lahars in the event of heavy and prolonged rainfall should phreatic eruption occur. (Raydes  Barcia